This is the first part of an essay which I wrote for the current issue of the ‘British Journalism Review’. Based on my experiences reporting from Russia in the 1990s, and partly as a response to concerns raised by Channel 4’s Jon Snow in his 2017 McTaggart Lecture it argues that not all journalists are too close to political elites — especially foreign correspondents in countries where the elites don’t want to to talk to them. That gives them insights often denied to their better connected counterparts. 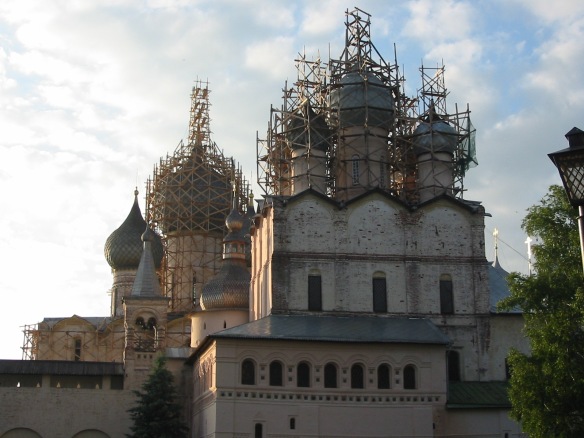 THE MISSED AND MISUNDERSTOOD STORIES of Brexit, and Donald Trump’s triumph in the US presidential election – as well as political correspondents’ failure to predict Theresa May losing her parliamentary majority last year – have all led to soul-searching about whether journalists are too close to the elite. In his MacTaggart Lecture at last year’s Edinburgh Television Festival, Jon Snow described his own background and said: “We are comfortably with the elite, with little awareness, contact, or connection with those not of the elite.”

Foreign correspondents often come into closer contact with those “not of the elite”. While the political upper class may want to talk to foreign media to get their international message across, these are more likely to be rare, set-piece events. In consequence, reporters overseas seek out other stories – those of the ordinary people who will more readily speak to them. Ryszard Kapuscinski was famous for this approach. It was also one often followed by western reporters in Russia in the early post-Soviet era.

It may seem strange, in this era of confrontation between the UK and Russia, to write this, but I have Vladimir Putin to thank for the experience which has led me to develop the argument I am going to put forward here. For it was during his own formative years as a politician – Russia’s troubled 1990s – that we western journalists based in Russia were left largely to our own devices. Senior politicians did occasionally give interviews, but the often chaotic world of Boris Yeltsin’s administration meant that they had plenty of their own worries to deal with.

This was when a large part of the political elite were keen to show that they were breaking from the Soviet past, promoting a western-style idea of a free press, a “fourth estate” permitted to speak truth to power. Russian journalists enjoyed then freedoms unknown before or since. We did, too.

The restrictions on travel which had been part of the Soviet police state were mostly gone. Travelling close to military installations without permission was an exception, as I discovered in 2009 when the FSB arrested my colleagues and me for visiting some glasshouses which happened to be about 20km from a naval dockyard.

Kept at a distance from the Kremlin’s innermost power struggles – as foreigners generally have been throughout Russian history (remember Churchill’s “Kremlin political intrigues are comparable to a bulldog fight under a rug. An outsider only hears the growling, and when he sees the bones fly out from beneath it is obvious who won”) – and allowed to explore the biggest country on earth, we had the chance to learn more than other generations of western journalists covering Russia. Going somewhere that your news organisation has never been before is always a help pitching a story, and travel – thanks to the troubled rouble – could be incredibly cheap. The weak currency did throw up some absurdities. One flight from St Petersburg to Moscow is memorable because the sandwiches in the airport café cost almost the same as the plane tickets.

With air travel literally as cheap as chips, and Russia’s overnight trains even cheaper, we took advantage. There was then a huge appetite for learning about Russia, with which we were enjoying much better relations. That has changed since. As I write this in late March, the talk – following the poisoning in Salisbury of the Russian former double agent Sergei Skripal and his daughter – turns to tension between Moscow and London. The foreign ministry spokeswoman in Moscow has warned that British journalists will be expelled from Russia should RT (the Kremlin-backed channel formerly known as Russia Today) be closed down in the UK.

It was different then. In the late 1990s, colleagues and I travelled to Siberia to do a story on forest fires; to the far north east, above the Arctic circle, where blocks of flats, abandoned after their residents’ jobs went with the collapse of the planned economy, were being buried by massive snowdrifts. With Allan Little, I produced for the BBC’s Newsnight a lengthy report on how people of the southern Russian town of Rostov-on-Don coped with an economy that had largely ceased to function: workers at one of Russia’s biggest agricultural machinery factories got jars of gherkins instead of wages.

On that first trip to Siberia we also interviewed a coming strongman in Russian politics, the Afghan war veteran Alexander Lebed, then governor of Krasnoyarsk. He later died in a helicopter crash, but his growing popularity provided a clue to the direction Russia might later take. The consequence of these trips was that we saw how the country was changing.

It was not changing in the way that many people in the west hoped.

Reuters’ Editor-in-Chief’s message to staff, ‘Covering Trump the Reuters Way’, raised  plenty of questions about how journalists should work with the new U.S. administration. I took on some of them for a piece this week on The Conversation

IT WAS HIGH SUMMER ON THE EDGE OF SIBERIA and suddenly there came the hardest question of a tough assignment. I had travelled to Yekaterinburg for a story about the spread of HIV. The city’s location made it a crossroads for the trade in many goods, including heroin. As a result, HIV infection rates were rising frighteningly rapidly among drug users. The trip involved encounters with sources, many of whom were distressed – some of whom who were frankly scary. But it was questions from the journalism students who were with us that really stumped me.

The questions – including the size of my salary – were largely predictable. One was not: “What do you do when the governor does not like a story you have written?”

The obvious answer from a Western reporter might have been something about the noble notion of the fourth estate speaking the truth to power. But I knew that such an answer would not work in the lawless Russia of the post-Soviet era. Journalists – especially those who uncovered incompetence or corruption among the powerful – could find themselves in serious, even mortal, danger. So I offered a reply which blended the ideal with a more realistic point

You can read the rest of the piece here

‘WRITE ABOUT TODAY. People will be asking you about this in 25 years time,’ I suggested on Wednesday to some of my MA International Journalism students at City, University of London. They were exhausted, having worked through the night to produce excellent coverage of the potentially world-changing events across the Atlantic. Some, themselves from the United States, had the experience of watching from afar as journalists something which will undoubtedly affect them as citizens.

Two issues among the many which will now be discussed are the effect Mr Trump’s victory will have on U.S. foreign policy, and what his win means for those established media organizations who failed to foresee it, and who cannot expect favourable treatment, even in terms of access, from the incoming President.

My world — and that of my generation — changed with the fall of the Berlin Wall, and the collapse of the USSR. The latter was my first foreign assignment as a journalist. This week I have written two pieces for The Conversation reflecting on Russia’s role in the world today: both in terms of politics and media.

In one,  I argue that Mr Trump’s victory is also a victory for Russia’s opposition to western, liberal, values — an enmity which has its roots in the end of the Cold War. In the other, I contend that Russia Today, or ‘RT’ as it now prefers to be known, is a successful part of Russia’s drive to regain some of the prestige and influence it lost with the collapse of Communism. Its success is a challenge to western ideas journalism as an impartial fourth estate — at a time when that kind of journalism is under unprecedented pressure.

To see what a divisive issue Russia remains, you have only to look at the comments…

Copies of the Communist Party newspaper, ‘Pravda’, from the last summer of the Soviet Union